“The famous “Splash” has been in captivity at my home for a period of two years. This animal has presented opportunities for study which have never previously been afforded to any naturalist. Knowing the difficulties as I know them, I think it is extremely unlikely that the opportunity will ever again present itself” – these were the words of Robert Eadie, the first person ever to keep and tame a platypus .

After obtaining the necessary permit from the Games and Fisheries Department, a young platypus was captured early one morning. It weighed 42 ounces and measured 15 inches in length.

The naming of Splash eventuated at a dinner party where several naturalists had assembled. Several names were suggested, but eventually “Splash” was adopted as being the most appropriate.

“Splash” was reared and tamed at Healesville, in the first “platypussary” in the world, built by Robert Eadie himself. During the four years of Splash’s life he had 1300 visitors and Robert Eadie’s work in this direction won world fame. Robert Eadie was able to gather information on this amazing animal and gained recognition as “an authority on the platypus”.

When released in to the tank, Splash immediately disappeared through one of the exits into a box at the end of the construction. Four ounces of worms were placed in a dish in the tank. The platypus showed no interest in the food, however, was observed swimming about during the previous evening. Despite food being placed in the tank each day, it took some 11 days before the food was consumed. During this time it was felt that the animal might die of starvation, however, it appeared to have plenty of vitality and showed no signs of emaciation. Once it’s eating pattern was established, it not only ate 16 ounces of worms each day, but also two large hard boiled duck eggs. However, it was difficult to ensure that the majority of the egg did not dissipate in to the water.

Splash slept for a large part of the day and would spend most evenings in his “exercise yard” . The yard was 8 feet square and provision was made so that Splash could not burrow himself to freedom. In order that he could indulge in his burrowing activities to a limited extent, turf was placed on top of the netting to a depth of about 4 inches. This burrow had attractions for Splash as he occupied and favoured it as a sleeping place in preference to his original quarters.

One day Splash was found in a weary state and showed every evidence of being a very sick animal. After providing some warmth in a box of straw in front of the fire, he “perked up” and was returned to his quarters where he consumed his normal intake of worms. A week later he was found in the same condition. History repeated itself and it was not long before it was realised that it might be hibernation. He disappeared into the burrow for a period of 112 hours, returning to the surface to obtain his “feed”. 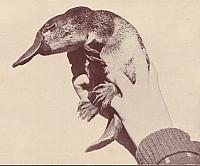 During the warm weather Splash had a habit of standing on his hind feet and reaching for the side of the tank, his front feet resting on the side.

During the first two years that Splash was “captive” he performed many “acts” which were not expected of a platypus. Robert Eadie endeavoured to accustom him to his voice and to recognise a whistle when he approached. The sound of a friendly call became familiar to Splash. He allowed Robert Eadie to open the sleeping compartment and would place his head in Mr Eadie’s hand. He stroked him along the top of his bill and he always showed the utmost contentment. However, any approaches by others would cause Splash to become uneasy and “growl”.

Perhaps the greatest joy of his existence was when he played with an ordinary kitchen mop , making frantic efforts to seize it with his bill. Once in his bill, he would throw his hind feet forward and grip the article with his claws. Mr Eadie could lift it vertically from the water and swing it from side to side.

The response of Splash towards Robert Eadie was most extraordinary. Apart from a dog, there is no other animal which has shown such joy in these periods of mutual understanding. It is all more remarkable because of the well known timidity of the animal in the presence of man. It took much patience and perseverance to bring about such a result, but it was worthwhile.

Splash enjoyed visitors and showed unmistakable evidence of his pleasure at their presence while in the water. So long as people remained he continued to swim around, “frolicking” with enthusiasm. Occasionally there were upward of thirty people present.

Robert Eadie was convinced that Splash was susceptible to colour and he began to investigate further. It appeared that when ladies visited the enclosure, he would react to certain colours, that being blue. He made unexpected movements and became agitated.

Mr Eadie found the taming of Splash very rewarding. Not only was he himself interested, but large numbers of people were delighted to have the opportunity of visiting Splash at close range. “All over the world the fame of Splash has travelled and approximately 13,000 people have visited Splash and marvel at the fine understanding between “keeper” and animal.”

After four years, Splash passed away and Robert Eadie made the decision to never keep another platypus. “We have found out, so far as we know, all there is to learn about a platypus and there could be no other object for keeping a platypus in captivity, except for show purposes and I am not prepared to do that” said Mr Eadie.

Naturalists from all over the world expressed there sympathy after the death of Splash and acknowledged Robert Eadie’s brilliant career, his remarkable work in the foundation days of the Healesville Sanctuary and his historical research on the famous platypus.

The “Healesville Guardian” describes Robert Eadie as “a man of great importance, not only to Healesville and Badger Creek, Victoria Australia but to the whole British Empire; one who services for the district in general will remain long in the memories of people who had the honour of his acquaintance.”